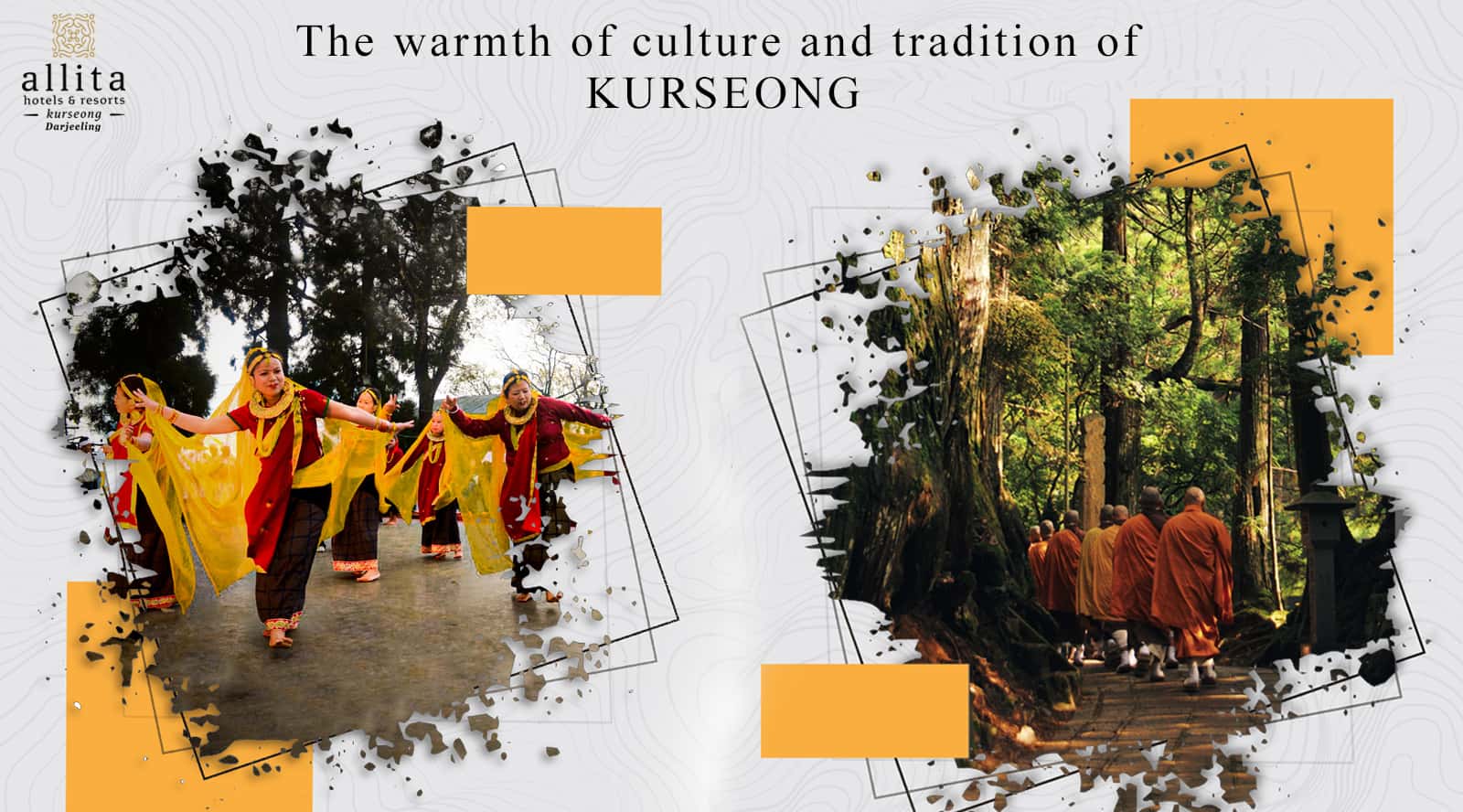 The Warmth of Culture and Tradition of Kurseong

20 Mar The Warmth of Culture and Tradition of Kurseong

The ethics of a place is procured from its culture and heritage. A place rich in culture is sufficiently and intensely cultivated by the tourists. The culture of Kurseong is an amalgamation of landscape, architecture history, local traditions, and colorful festivals. The people of Kurseong observe various festivals due to the existence of a diversified population. Being located in one of the hills of Darjeeling, Kurseong and its people celebrate many local festivals including the main festivals like Dashain, Tihar, Buddha Jayanti, Christmas, Holi, and Ram Navami. The culture of Darjeeling is diverse and includes a variety of indigenous practices and festivals. Many of the Nepali Hindus, as well as the Buddhist and other ethnic groups such as the Lepchas, Bhutias, Kiranti Limbus, Tibetans, Yolmos, Gurungs, and Tamangs, co-exist with each other and have their own distinct languages and cultures. Though these groups of people differ in their culture and standard of living, they share cordial relationships with each other.
The Nepali Hindus, residing in most parts of Darjeeling, are rich in folk culture. Their form of dances and folk songs attribute to the Gods and Goddesses of both the Hindu and Buddhist sanctuary and creates Nepalese folk songs and dances. These folk dances are performed to appease Gods and Goddesses or ward-off the evil spirits. One of the most popular dance forms is ‘Maruni Naach’ and the oldest one among the Nepalese. ‘Maruni Naach’ is performed to celebrate the return of Lord Rama to Ayoddha after his 14 years of exile. ‘Dhan Naach’ is performed to celebrate the harvest of the local crops. Makar Sankranti or ‘Maghe Sankranti’ is celebrated to welcome the spring season and fortune for the rest of the year. During ‘Losar’, a New year celebration in Darjeeling, yak dance is performed with colorful attires. The women perform the rituals to worship mountain God. Sri Panchami or Saraswati Puja signifies the Goddess of knowledge.
Nepali, Hindi, Bengali, and English are the prevailing languages here, whereas Bengali is the language of the plains.
Due to the varied mix of cultures, the local and ethnic food is also quite varied. You can treat your taste buds with exotic but homely food and discover a montage of culture. Meat dumplings are steamed and accompanied by a bowl of clear soup called ‘Momo’ and ‘Thukpas’, which are noodles mixed with egg/meat, vegetables with a soup base are the dominant part of the cuisine partly due to the cold climate. ‘Aloo Dum’, a potato preparation is also famous here and the various teas, which the hill people cannot do without. Moreover, the culture of the hill people is uniquely expressed in the exquisite handicrafts like ornaments, trinkets, and handlooms.
Therefore, the existence of various hill people, belonging to different religions provides a regional distinctness to the local culture. Kurseong is worth a visit not only due to the above-mentioned points but also to meet the hill people to witness their simple lives, and also to know what ‘Unity in Diversity’ feels like.